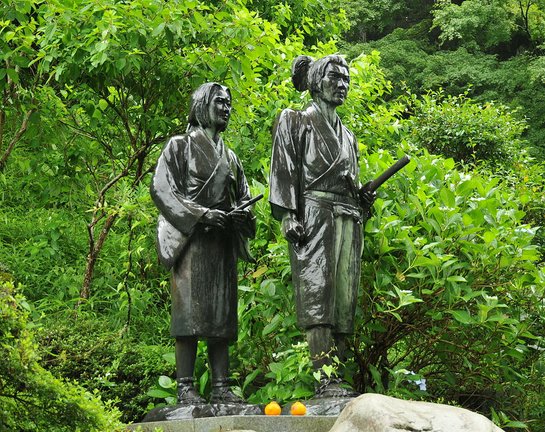 Musashi Miyamoto was born on 12th March 1584 in Miyamoto, Mimasaka - a few miles from the temple. After his parent's death, age of 7, was adopted by an uncle, a priest of the temple. At the age of 13, he fought against Kihei Arima, whose sword style was called Shinto Ryu. From then on, he fought over 60 duels but he was never defeated. "Musashi and Niten -. A sword-man and an artist" is certainly the same person. (Musashi Museum : location 94 Miyamoto, Ohara, Okayama). Around 1920, a famous novel writer Mr. Eiji Yoshikawa had spent several years staying at the temple and wrote a novel "Musashi Miyamoto". You can read the English translation by Charles S. Terry "The Best Scenes from MUSASHI". You can also read A book of Five Rings Gorin no Sho written by Musashi, translated in many languages.

When visitors approach the temple gate, they see two huge Gingko trees. Most of them say "Two poles rise from the ground and become one huge tree. This must be the feeling of the Niten Ichi Ryu of Musashi". This means Two naturs/two arts become one style in the sky . Musashi taught / teaches us 1+1=1 I hope you understand.

Musashi Kiln: A very famous ceramic of Bizen-yaki, Work shops are located in the Daishoji Temple and in Versailles Palace in France. The Pottary Master is Priest Daiei Fukudenji 57nd Generation successor of Imperial temple, and a brother to Soke Yamaue.

Ikebana: Saga Go-ryu flower arranging school. Jushoku (head of the temple) is a professor of Ikebana of Saga Imperial Palace and teaches also in Versailles Palace only for Royal families.